Turn of the Century

Gladstone suffered a series of misfortunes that was its demise. First, a fire destroyed the Plow Works. Then the founder of the town, William Dawson filed for bankruptcy. The last straw was when the railroad shut down the shops sometime around 1917. Gladstone became a ghost town with many people leaving or burning their houses for insurance.

Trains still remained an everyday sight in Gladstone for many years after. The depot stayed in service through 1950s, but the railroad changed the name to Gloster in 1910 to avoid confusion with Gladstone Michigan. The people who stayed behind were the farmers.

Truck farming was the main business in the areas adjacent to Street Paul through much of the first half of this century. The farmers were the local government for many years. In 1878, a town hall was built for New Canada along the north shore of Lake Phalen and was moved to Gladstone in 1900. Annual meetings were a big event, and the little building was packed with people. By the early 1950s the old building was run down, so the town decided to have its meetings in a room in the back of the Gladstone Fire Building. 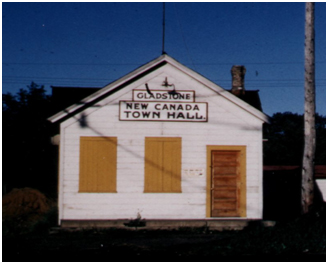