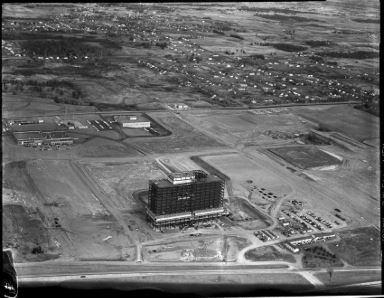 By the late 1930s, 3M's headquarters and research offices were scattered across St. Paul and executives began planning for a new, single location with ample room for expansion. Chairman William McKnight framed his vision: "How much research and administration space do we need for a billion-dollar company?" As chairman from 1949 to 1966, he oversaw the company's expansion and relocation outside St. Paul.

Executives considered several urban locations, but soon came to favor a rural one. The decision makers took into consideration where most 3M employees, and executives in particular, lived. Surveys showed a strong preference for a site north of St. Paul. Ultimately, however, the decision came down to inexpensive, open land, low taxes, and proximity to better highways. In 1952, the company made their decision: the new campus would be in New Canada Township.

Between December 1952 and October 1953, 3M purchased five parcels of land from families in New Canada. The cost of the 139.35 acres was $177,900; or, $1,277 per acre. Some of the families were farmers and most had lived on the land since 1900. The farmland that had provided generations of these New Canada families with homes and incomes would now be the foundation of a global scientific enterprise.

3M planners knew proximity to a highway would greatly benefit the new facility. By 1952, federal highway department officials were proposing a new interstate highway system through Minnesota. Highway 12, which ran through New Canada and the future 3M site, was a prime candidate for upgrading. The Interstate 94 section beside 3M's site was completed in 1968. With high-speed freeways and the availability of inexpensive automobiles, 3M workers had plenty of choice on where to live.

3M was keenly aware of New Canada's low taxes, which were much lower than St. Paul's. In fact, the tax rate was a major factor in 3M's decision to build in New Canada. By 1965, after 3M had become the largest corporation in both Maplewood and the state of Minnesota, the business became a full one-third of the Maplewood tax base.

The first research laboratory building at the 3M Center was completed in 1955 and the first headquarters building was opened in 1962. The construction of new buildings has been an almost continual process since then and both 3M and Maplewood have benefitted from the decision made over 64 years ago. Photo credit: Photo courtesy of Minnesota Historical Society