The Gateway Trail is a "rail to trail" success story. A recreational trail since 1993, it runs from St. Paul to Pine Point near Stillwater. More than three miles of the trail is in Maplewood. From Larpenteur Avenue near DeSoto, the trail winds through Keller, Flicek and Robinhood Parks, past Maplewood City Hall, and into North St. Paul. Long before it was a recreational trail, however, the path was key to rail service in the area. 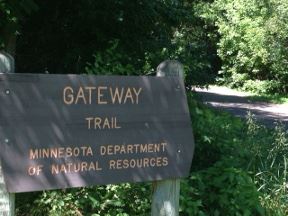 Its rail history began in 1880 when the Wisconsin Central (WC) Railroad needed a right-of-way to extend passenger and freight service into St. Paul from their main line in Chippewa Falls, Wisconsin. They completed tracks to Lake Phalen Junction in 1885 and to Trout Brook Junction in 1888, where they used other railroad tracks to run trains into their St. Paul depot. Together these lines make up the section of the Gateway Trail passing through Maplewood.

Lake Phalen Junction was renamed "Gladstone" in 1886 and today is where the Gateway and Bruce Vento Trails intersect. In 1910, both the Soo Railroad (leased from WC beginning in 1909) and the Northern Pacific (which acquired the St. Paul and Duluth Railroad) depots at Gladstone were renamed Gloster to prevent mix-ups with the Gladstone, Michigan station. Only the railroads used the name "Gloster; it never caught on with area residents. Google, however, has preserved both "Gloster" and "Gladstone" on their digital maps.

In the 1910s, 52 freight and passenger trains passed through Gloster daily, but rail traffic declined during the following 70 years. The Soo tracks were abandoned by 1982, and the right-of-way became property of Minnesota Department of Natural Resources (DNR). After a court battle by neighbors wishing to buy the land, the Minnesota Supreme Court ruled it would remain public. The legislature appropriated funds for a recreational trail in 1990, and the grand opening was June 5, 1993.

In 2015, the DNR announced it would no longer plow the trail in winter. But after heavy protest from bicycle commuters and walkers, this decision was reversed, demonstrating that this public transportation corridor remains popular today. Tweet: Gateway Trail runs on 100 years of railway history.