What happened to Maplewood's Sandy Lake? Some metro residents remember fishing and boating on the lake in their youth. Once on the far country edge of St. Paul, Sandy Lake was never envisioned to be surrounded by houses and streets like the area is today.

In 1938, the St. Paul Water Utility was given permission to empty waste and sediment into the lake from their nearby McCarron's Lake Water Treatment Station. In 1951, St. Paul city officials permitted the addition of lime to the area's water supply. Lime acted as a precipitate and helped remove contaminants from the water before it entered city pipes. The "spent" (used) lime was easily pumped to Sandy Lake for "disposal." But in 1970, mechanical centrifuges were installed at the plant to spin and separate water and solids. This allowed most of the solid waste and sediment to be removed by truck instead of pumped into the lake. Farmers wanted the spent lime because it acted as a soil conditioner to enhance crop production. Some estimates say the centrifuge method reduced the amount of lime being pumped to Sandy Lake by 70%.

During the 1980s, a large amount of "dewatered lime solids" continued to be hauled away and spread onto farm land. As technology advanced, new filters and pumps replaced the 1970s centrifuges. This eliminated the need to pump any lime waste into Sandy Lake. But as a result of the previous lime disposal, Sandy Lake was no longer a lake, only a few small lagoons. Eventually nearly all of the former lake was covered with four feet of soil with the hope of repurposing the space. 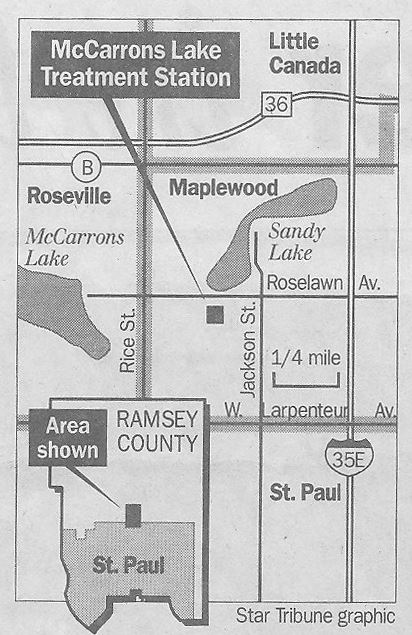 Over time, and as citizens have deliberated, Maplewood has built a retaining wall on the west end of the neighborhood and planted trees for natural screening. Plans and dialogue continue for the 32-acre site. But for now, what was once a lake is covered with soil with the exception of two filtering ponds on the southwest side. The lake that was Sandy Lake is now a memory of times past.