Facilities Closed Due to COVID 19 Read On...

The House at 1800 English Street

The house at 1800 English Street was home to Rex Shane, Gladstone's first mailman. Rex Shane owned and operated the mail wagon to deliver mail over a large area - east to the Poor Farm, north on White Bear Avenue to County Road D, west to Rice Street, and south to Frost Avenue, which took all day.

The house was built in 1886 as a single-family home by Rex and his wife Jessie. Rex and Jessie were married in 1884. The main level of the Shane house consisted of a kitchen, parlor, dining room, front room and front hallway with an open, beautifully carved, wood stairway to the second floor. Upstairs were three bedrooms, a bathroom and a large open sitting room. The walls were plaster and each door had a transom window above it. The upstairs floor consisted of wide plank boards. The basement walls were fieldstone with a dirt floor. 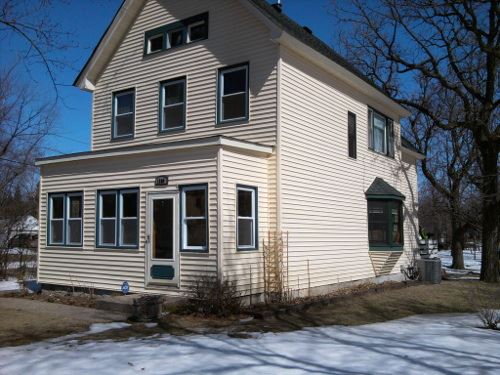 The back of the property line is on today's Vento Trail. A large shed/garage in the back yard has two sides covered with sheet metal and two with wood siding. A large garage door faced Ripley Street. This building was partitioned into several rooms or spaces to house an office, storage room, and horse and buggy. The building in the back yard of the Shane house is where the mail wagon was stored, and where Rex Shane gave haircuts. Two small buildings were initially present in the backyard, possibly a chicken coop and a small tool shed.

Jessie died in 1946 and Rex died a year and a half later when he was 88 years old. Between 1947 and 1965, the house was sold and remodeled into a duplex with upstairs and downstairs renters. In 1997, the Shane home was awarded Maplewood's Century Award. In February 2010, a fire gutted most of the interior and it had to be totally rebuilt, but in a manner consistent with the original construction.