Keller Golf Course is well known for serving famous regional golfers and gangsters alike. The original clubhouse and pro-shop were demolished in 2012, but the fireplace from the historic clubhouse has been preserved and the architecture of the new building reflects the same features of the original building. The gabled roof, limestone blocks and the shingled upper story harken to times before. Original oak trees are still standing over holes 4 and 17. 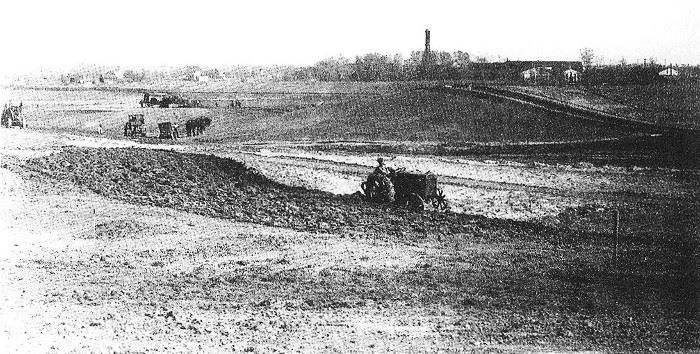 In 1927, the state legislature approved a bill to authorize the golf course and the design work was started. In 1928, the last of the land was purchased and construction started. Construction was completed using horses and tractors. The course was not designed by a nationally renowned architect, but rather by Paul Coates who was Ramsey County's civil engineer. The County wanted to save the $12,000 to $15,000 architect fee so Mr. Coates visited some of the country's premier golf courses for inspiration. The 94.6 acres of rolling, treeless farmland was purchased by the County for $42,600.

The clubhouse was designed by St. Paul's municipal architect, Clarence Wigington, who also designed the water tower in Prospect Park and the Highland Park Golf Course clubhouse. Mr. Wigington was the nation's first African American municipal architect. The limestone for the building was salvaged from buildings razed during a street-widening project in downtown St. Paul.

The course opened in 1929 with the first professional tournament, the St. Paul Open, in 1930. Keller hosted many tournaments including PGA Championships, Western Open, eight Patty Berg LPGA Golf Classics and the National Amateur Public Links Championship. The pro shop was built in 1940. From the beginning, Keller Golf Course was acclaimed for the inspired use of rolling terrain, diverse holes, exciting views, and challenging but universally playable holes.