14,000 years ago Maplewood was covered by a mile-high glacier. As the climate warmed, the glacier retreated leaving the landforms we see today. Ancient pollen grains in lake sediment help scientists piece together a timeline of the plant communities that followed the glaciers. 12,000 years before present (A), this area was a spruce parkland. This transitioned to spruce forest by 11,000 BP, where you might have encountered mastodon, giant beavers, or saber toothed cat. 2000 years later boreal forests, like those in northern Minnesota today, dominated the Twin Cities landscape with spruce, fir, pine and birch. 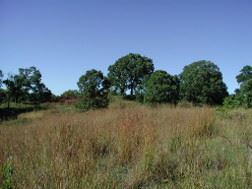 Millennia later, the climate warmed and 7,000 years ago prairie and oak savanna covered most of Minnesota except the Arrowhead. Animals like bison and elk roamed the area. Prairie and oak savanna vegetation dominated the Twin Cities until about 700 years ago (1,300 AD). The climate became a bit cooler and moister and "big woods" moved into the region - a forest with sugar maple, oak, elm, and basswood. But burning of the landscape by Native Americans favored oak savanna and oak woodlands and these prevailed in many parts of the metro, including Maplewood.

In November 1847, Deputy Surveyor Isaac N Higbee and his crew trudged through what is now Maplewood to conduct the Original Land Survey of the area. They hiked survey lines a mile apart on what would later become a grid for roadways. As the survey crew carved blazes in bearing trees to mark survey sections, they jotted down notes about soil and vegetation. "Land hilly, soil 2nd rate, timber scattering," "Oak openings interspersed with lakes, marshes, swamps." These notes provide a glimpse of the vegetation in Maplewood at the time European Americans began settling in this area.

In the mid-1800s much of Maplewood was oak savanna. Look for a remnant of the savanna on the east side of Wakefield Lake, with mature oaks stretching broad limbs over a groundcover of prairie grasses. Agriculture, industry, development, and suppression of fire dramatically changed the landscape after the mid 1800s and today Maplewood is a mosaic of developed land, parkland, and woodlands.