Driving on Larpenteur Avenue near Beebe Road, it is hard to tell where the old "Witches' Woods" were. The original woods have been replaced over time by houses and townhomes. To envision the woods, one must go back in time. In the late 19th century, farmers cleared acres of trees in today's Maplewood. Scattered groves of oaks and other trees remained, mainly in areas that were too steep or too swampy to plow. There was one notable exception. This was an 80-acre rectangle-shaped slice of land east of Beebe Road bounded by Holloway on the north and the old Beebe Laboratories to the south. The streetcar line to Wildwood on White Bear Lake cut across the woods on the east side. 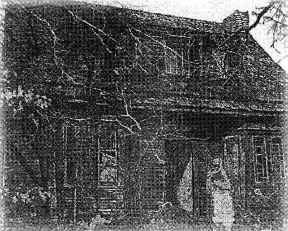 In the early 1850s, a group called the Minnesota Church Foundation purchased the land that would become "Witches' Woods." Around the turn of the century the Judd family bought a piece of this land and a two-story colonial house was built. It was a very impressive house and stood out from the other more modest homes in the area. It had a fireplace on each floor and a veranda running along one side. In this house lived a mother and her two daughters, Lydia and Zada Judd. The sisters were teachers, with Zada serving a stint as a principal in St. Paul until they retired around 1907. They kept to themselves and did not talk to many people.

The Judd's closest neighbor was the old Beebe Laboratories, about a quarter mile south of their home. In the early 1940s Dr. W L. Beebe, who was president of the laboratory, said that Lydia hadn't left the house in 30 years. Zada was the younger sister and was seen frequently. She was a devout Jehovah's Witness and would distribute religious pamphlets in downtown St. Paul. Zada would attract attention because she would dress entirely in black from shoes to hat. Despite her small size, she could walk very fast. Betty Lyon from the North St. Paul Historical Society said that she could still see Zada dressed in black standing as still as a statue with a religious leaflet in the air.

The sisters lived deep in the woods. The only way to get to the house was through a winding trail through the woods. If anyone came or left the house the neighborhood was well aware of it. One day the neighbors realized that they hadn't seen the mother of the Judd sisters in quite some time. The neighbors never saw the mother again. There was no public notice of her death and no known funeral. Rumor spread that the mother was buried somewhere in the house or on the grounds by the two sisters.

In 1940, a St. Paul firm bought the property that was now widely known as "Witches' Woods." The sisters refused to leave. Two years later, and four days before Halloween, the sisters were forced from their home after Ramsey County Sheriffs broke down the door. The two sisters were taken to the old Ancker Hospital. Deputies found the house filled from floor to ceiling with garbage. Five tons of trash was hauled away in one day. The cleaners could not find a bed in the house, just an ancient frame of one. Some of the odd things found were a box containing 25 brand new children's sweaters, a half-dozen bicycle bells, and enough buttons for everyone in St. Paul. The Sheriff and his deputies began to search the property at the neighbors' request to try to find where the mother of the Judd sisters was buried. Their search came to no avail. Lydia died in 1950 and Zada passed away in 1958; they are buried at Forest Lawn Cemetery.

The land was slowly developed over the next 50 years. In the mid-1980's, there were still remnants of the woods and by the late 1990s no trace of the original woods existed. The tales of "Witches Woods" persisted. The story passed along from generation to generation of children that grew up in Maplewood and the location would change from place to place, moving to and fro along Larpenteur from Century to McKnight and even south to the Maplewood Nature Center. What the kids are saying today is hard to tell, unless they are avid readers of the Maplewood Review. Maybe someday it will be a tale for the 100th Anniversary of Maplewood in 2057.