Maplewood's oldest park is a 1/5-acre triangular piece of land located one block east of Lake Phalen between Phalen Place, Ripley Avenue and Gordon Avenue. Lookout Park was platted in 1884 by Emmanuel Good and his business partner, John Schurmeier in the middle of a 23-acre housing development named Lakeside Park Addition. 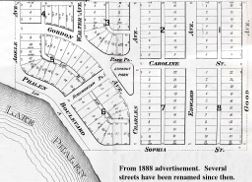 The two were partners in a woolens business and Schurmeier also owned a wagon manufacturing firm near downtown St. Paul. In 1897, Schurmeier was a director of Second National Bank and described as one of the biggest taxpayers in St. Paul.

An 1888 advertisement describes how the park received its name: "A fine observatory, 55 feet high, is also built in Lookout Park in this Addition, the highest story of which is 275 feet higher than [the Merchants Hotel at Third and Jackson Streets in St. Paul]. From this observatory the city [St. Paul], North St. Paul, New Canada [township], State fair grounds, Minneapolis and the whole surrounding country can be splendidly viewed." This wooden tower probably was dismantled about 1908.

The ad also confidently boasted of recent additions such as three streets connecting it to St. Paul, the Gladstone railroad depot only three blocks away, another depot yet to be built on the Wisconsin Central railroad just one block away [this was never built], the nearby Gladstone Railroad Shops, the St. Paul Plow Works, the Malleable Iron Works and a proposed streetcar line to the area [also never built]. The final sentence is: "If you wish to make money, and make it fast, buy in this Addition or neighborhood, and buy now." Many of the streets on the early map were named for relatives of Good and Schurmeier.

Lookout Park exists today. In fall and winter you can just glimpse Lake Phalen through the branches of trees.