One of Maplewood's most famous residents arrived around 1874. Sarah (Brown) Wakefield purchased a tract of land on the western shore of the lake that is named after her.

Sarah's moment in the spotlight was twelve years earlier during the Dakota Conflict In 1862, she was living with her husband and her two small children at the Lower Sioux Agency near Fort Ridgley in southwest Minnesota. She happened to be in the wrong place at the wrong time when the Dakota people, suffering under years of mistreatment, began to fight with the settlers. Sarah and her husband, Dr. J.L. Wakefield, happened to be friendly to the Dakota. In fleeing the attacks he unwittingly sent her into the middle of the conflict. 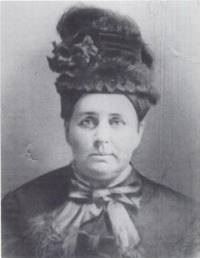 When Sarah was captured, a Dakota named Chaska recognized her and refused to let the other Indians harm her or her children. After the conflict, Sarah demanded that Chaska not be harmed. Despite Sarah's pleas, he was one of the 38 Dakota hanged at Mankato on December 26, 1862, the largest mass execution in American history.

After Sarah was reunited with her husband, they moved to Shakopee. When he died in 1874, she moved to the Gladstone area of Maplewood. She penned a book titled: Six Weeks in the Sioux Teepees explaining her ordeal. It is unclear why she moved to the lake which bears her name today. Apparently Sarah didn't farm herself, but one of her daughters, Lucy (Nellie) Wakefield was listed as a farmer in the 1881 Ramsey County Township Directory. Sarah knew when it was a good time to get out of Gladstone and sold the land during the boom time in 1887 for $25,000. She moved to St. Paul where she died in 1899.