There have been several major fires in Maplewood which caught the attention of locals and are still remembered by many. Some of these are highlighted below.

The Beebe Laboratories burned in 1965. It was a fully involved structure fire, which was more serious due to hundreds of gallons of fuel oil stored in the underground boiler room. 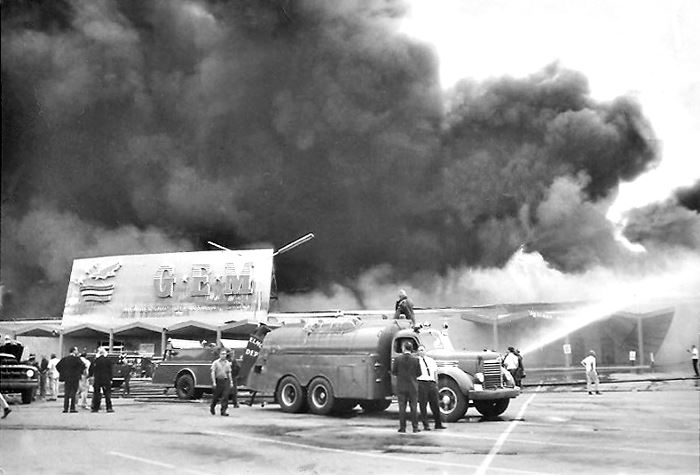 When the Gem Department Store burned in 1967, the flames and smoke were visible for miles and miles. The fire started as an explosion in the paint department. It took ten fire departments days to extinguish the blaze.

Ramsey County Corrections sustained a fire in the butcher shop in 1970. Six inmates were trapped inside their cells because police could not get the keys to work. Eight people sustained smoke inhalation.

The Northwood Country Club burned in 1974. North Saint Paul and East County Line responded but the 50-year-old building was deemed a total loss. There were 100 diners in the supper club who escaped safely.

The Marco Polo Supper Club burned in 1976. Six fire departments, including East County Line, responded but the building was lost entirely. Estimated damages were over $500,000. The fire started in an addition which was under construction.

In 1979, the sixth floor of 3M's Building 220, the main administrative building, burned. The fire started in the early morning hours and caused extensive damage to the fifth through eighth floors. Estimates of the damages were $1.5 Million. More than 100 firefighters responded to the blaze. At the time, there were no sprinkler systems installed except in two storage rooms. Later, a fire would occur in building 209 and cause $12,000 in damages. After sprinklers were installed, there was a fire in the basement of building 207 which was contained thanks to the sprinkler system.

Hill Murray High School sustained smoke damage in 1982 when a transformer overheated, causing 18 people to go to the hospital for possible exposure to PCB's (polychlorinated biphenyls).

The Guldens Supper Club burned in 1983. More than 50 firefighters fought the blaze and all Maplewood fire departments responded. The fire started in the basement.