The Mystery of the Missing Groves

How can 13,000 trees go missing? That's what happened to three tree groves planted in the early 1900s by the Minnesota Federation of Women's Clubs Fourth District. Over four years, three large plantations were established in the Keller Lake area. The goal was to use the revenue they produced to plant more trees and create bird sanctuaries in Ramsey County. At the Rounds-Aker Grove, boy scouts planted 3,000 trees in 1927. In 1928, an additional 3,000 trees were planted nearby, followed by a planting in 1929 of 2,500 pines in the Flicek Park area. And in 1930, 5,000 trees were planted on the "Anna O'Toole Island" in Keller Lake.

The Club became inactive after 1938, and over time the plantations faded from memory-until 2014. Former Maplewood Mayor, Bob Cardinal, remembered the boulder and plaque commemorating an elm grove planted along Keller Creek. Searching in a nearby wooded area, he found the over-turned granite boulder. Maplewood replaced and rededicated the monument during Arbor Day festivities in 2015. 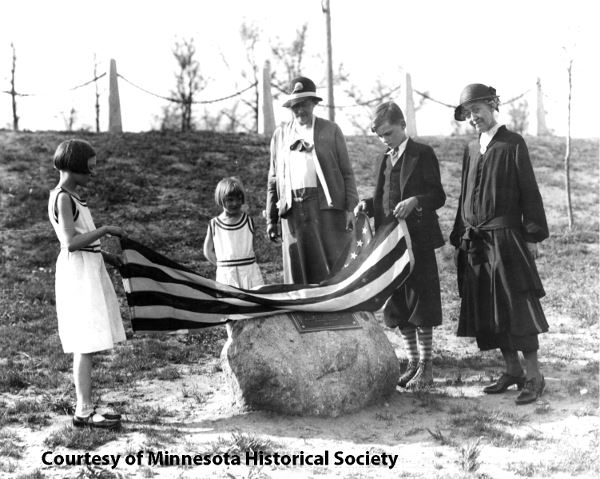 Intrigued by the discovery of the rock and plaque, Maplewood Area Historical Society and staff from the City and the County went in search of the historic groves. One grove of original trees was found-red, white, and jack pines in the Rounds-Aker Grove on the east side of the Spoon Lake parking lot. Tree cores confirmed the trees were approximately 88 years old and so were likely from the original planting.

But the rest of the original trees are gone. Many likely died from drought. Some were vandalized. Some succumbed to construction damage and development. American elms that survived the above assaults were devastated by Dutch elm disease in the 1960's and 1970's.

To further explore the Mystery of the Lost Groves, visit www.maplewoodMN.gov/trees and find the links to the Historic Groves webpage.